September 25 26, 2015 - MURDER AT THE WATERFRONT DISTRICT - Murder Mystery Dinner Theatre - about 200 people took in the laughter and mystique of the evening.  Our original script was written by Germain Begin and James Gaub - who did a bang up job of it. They had everyone laughing, listening, scratching their heads and certainly paying attention through the entire performance. Those ladies of the evening that worked the District sure were smashing and kept the detectives hopping. Police Chief "Ted Gough" and his secretary Dianne Dugan, "Mabel", kept up the style of the late 40's.The "who done it" twists and turns of the script were enjoyed by everyone.  Nothing was as it appeared. Our Chief Detective, Jude Bastion, was fantastic in her role as "Chief Detective Cumberbatch" and Bev Shea as "Detective Bud Lite", Rob Scranton as "Sam Slinky" in their Senior Detective rolls in 1949 were quite believable! Governor Clipton's Body Guard Blair Scranton as "Rocko" was formidable while doing his job. We had a lot of fun, saw more than we should of some of the characters, laughed a lot, had to work on who did what but overall it was a great evening. We were served a superb Roast Pork Loin dinner, mashed potatoes, broccoli with cheese sauce, coleslaw and dessert.  The event brought in folks from all over the area for the and all enjoyed the wine provided by our sponsors - Celista Estate Winery. We all enjoyed the setting of the Celista Estate Winery Gala where folks were dressed to kill and, oops at least one did just that. The writers are already talking about next year's script so we shall see what they come up with. 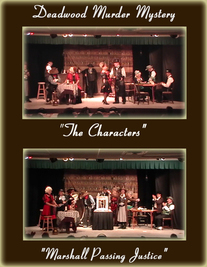